Don’t be Afraid to Suck

Because sucking at something is the first step towards being kind of good at it.
I became interested in hand lettering around the time I quit my job to be a stay-at-home mom. I was terrible at it. And I suffered from a crippling perfectionism that made me scared to try and my failures tore down the courage it took to begin with. Enter my first art journal on the cover of which I wrote in big letters, “An Exercise in Imperfection.” Yes, it took a lot of agonizing to get it “right.” The point is, I was giving myself permission to screw up whatever I put in this book. Don’t matter, don’t care, just do it. I’d like to say that was the end of my struggles, but it wasn’t. Five years later, I still struggle. The more I fantasize about a project, the harder it is to get started. I’ve built it up too much in my mind. But I struggle less. You know my giant sketchbook? I made it so big so I could draw the same idea over and over again on the same page so I could monitor my progress, repeat the things I did well, and improve the things that sucked. I’ve reached the point where I know it’s not going to work the first time, but with persistence, I know I can get it there. I’m even comfortable offering it as a service.

My Our Adventure Book is the most popular item in my Etsy shop, and people frequently ask to customize it in some way–usually adding a globe or leather tie to the cover. My two favorite customizations so far have been with lettering. One guy wanted to use the album to propose to his girlfriend and he wanted to put pictures of the two of them in the first few pages with a title page saying, “What We Did,” and other dividers for guest signatures at the wedding, pictures of their wedding, their honeymoon, and for the future. I thought it would be awesome to model these dividers after vintage travel posters, but for cost reasons, he opted for just one poster-y divider and the rest were simpler. When I agreed to this project, I had never done anything like this, but I gathered some inspiration from Pinterest on lettering from that era and just got going–no obsessing. The shipping deadline helped with that 😉 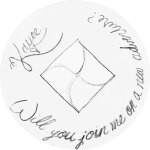 The second guy also wanted to use the album to propose to his girlfriend. His idea was to hide the ring in the book somehow and I made a couple of suggestions. I could make the back cover thick enough to carve out a space for the ring, or I could just put a petal envelope somewhere in the book with the ring inside. I thought it would be cool to do some lettering saying, “Will you marry me?” But he returned with, “Will you join me on a new adventure?” which I thought was adorable. He rejected my first try, which was fine by me. Based on his feedback, I tried to come up with a different composition and decided the square petal envelope was really holding me back. I first thought of the petal envelope because it would be easy to get the ring out, but I thought there’s got to be a way to have the ring sort of pop up when opening a regular envelope so she wouldn’t have to fish around for it. So I devised this envelope (after many prototypes), and the ring slides up when it’s opened.

Then the composition fell into place, and the lettering looks much nicer.

Now back to the real message of this post. Don’t be afraid to suck. The hard thing about reading about people doing what you want to be doing is that they so rarely share their failures. You only see them being good at it. So I’m sharing some failures of mine to let you see that I didn’t start good. I’m still not that good. I still fail. That just means I’m on my way.
What inspires you to try something new?  To persevere in the face of your failures?

When God created the world, he did it in six days and rested on the seventh. I always wished there was just one more day in the week, an eighth day just for me to pursue the thoughts in my head and translate them to the physical world. There are only seven days, however, so I steal my creative moments in between being a mom and my work binding books and making boxes for clients all over New York City. I love working with my hands, learning new things, and I'm here to share those lessons with you. There are only seven days in a week. Why not eight? Guess I'll ask when I get there.
View all posts by sappling →
This entry was posted in Arts and Crafts, Bookbinding, Lettering, Paper Arts, Paper Cuts, Scrapbooking, Visual Arts and tagged book dividers, bookbinding, engagement, fancy script, hand lettering, mid-century modern typography, ornamentation, Our Adventure Book, proposal, ring envelope, slider envelope, slider pop-up, vintage travel posters, wedding. Bookmark the permalink.

6 Responses to Don’t be Afraid to Suck